"Welcome friends! What can I do for you today?" ― Patton

Patton is an acorn weevil sporting a gray cloak and what looks like a gas mask. Patton has been exiled from the Ant Kingdom due to his "blatant disregard for safety regulations."

Patton lives just outside the Ant Kingdom's borders in a glass 'Beewell' medicine bottle in the Forsaken Lands.

Patton is very nosy but will volunteer his services for nothing more than having willing test subjects (and berries).

Patton is able to extract stat bonuses from level ups and upgrades such as Heart Berries, Bond Berries, Power Peppers and Iron Seeds (for 75 berries) once the player reaches the Termite Capitol and Elizant II leaves the party.

The stat bonuses and upgrades you've applied are taken off the player and distilled into key-item potions that can be reapplied or converted to another kind (for 15 berries each).

Patton is unable to convert ATK, DEF and 1 HP/TP potions into other kinds of potions. 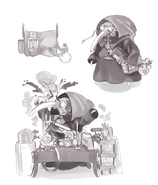 Add a photo to this gallery

Retrieved from "https://bugfables.fandom.com/wiki/Patton?oldid=3747"
Community content is available under CC-BY-SA unless otherwise noted.