Start a Wiki
The Jellyshroom is a mushroom and jellyfish hybrid with the ability to fly. They are especially vulnerable to Leif's ice attacks.

Jellyshrooms are usually found floating around Snakemouth Den, but can also appear under the guise of a mushroom. You can tell which mushrooms are jellyshrooms because they don't have the glowing light under them.

The party first encounters a hidden jellyshroom in the area before the large door in Snakemouth Den, revealing its presence to ambush the party, but is interrupted by Leif's ice magic.

A Jellyshroom standing on the ground. 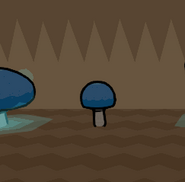 A diguised Jellyshroom. Notice it has no glow like the mushroom near it.
Add a photo to this gallery
Edit

Retrieved from "https://bugfables.fandom.com/wiki/Jellyshroom?oldid=5657"
Community content is available under CC-BY-SA unless otherwise noted.