Jaune is Vi's close sister. She is an artist who paints art for the Bee Queen in the Bee Kingdom.

Jaune is a tall light-orange bee with a blue artist hat, brown eyes and a paintbrush that replaces the stinger. Her antennae are also curled in a spiral-like shape.

As one of the painters who makes art for the queen, Jaune is very hardworking and ambitious. She does not like to be disturbed by others when creating art.

Comparing to her sister, Jaune is more mature and rational. Upon her first meeting with Team Snakemouth, she is angry towards Vi (who insulted her art skills, telling her that she drew like a Weevil, in response to Jaune's constant belittlement of Vi's ambitions to become an explorer) and does not want to forgive her entire history of insults just because she and her teammates saved the Honey Factory. However, when Vi gets the Red Paint and actually apologizes for her rudeness in the past, Jaune begins to understand Vi, her own inconsiderateness and eventually makes up with her, and also paints a picture (titled A Bond Thicker than Honey) despite being busy with the Queen's. After that, she allows the team to rest at her art room for free. 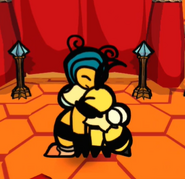 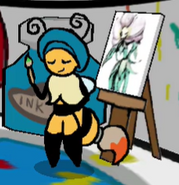 Jaune in the beta version.

Community content is available under CC-BY-SA unless otherwise noted.
Advertisement