While looking for a spot to build the Ant Kingdom on, Elizant I and her people traveled through the Forsaken Lands. The Abandoned campsite was taken over by Mothflies, but its crazy ruler was dispersed by a team of explorers.

The Ancient City contains the remains of a temporary settlement used by Queen Elizant I and her people before founding the Ant Kingdom. It was eventually abandoned as they searched for a location to create a permanent settlement.

Immediately outside the city are a number of tanks adorned with the crest of the Ant Kingdom. They were used by the Ant Queen during her search. Due to their damaged state, they had to be left behind.

Initially, when Team Snakemouth first arrives, the city is inhabited by hooded and masked bugs that speak an undecipherable language. After defeating the False Monarch, the other inhabitants flee, leaving their masks behind. The False Monarch's nature implies that these citizens were also Mothflies in disguise.

A Venus' Bud can be found inside a dilapidated building with an inn sign at its front.

A building. Inside is a stump with a mothfly mask on it. 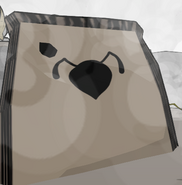 A scrap of the tanks found in the Forsaken Lands with the Ant Kingdom's crest.

The inside of the tent at the far back of the city.
Community content is available under CC-BY-SA unless otherwise noted.
Advertisement